Organ Donation: A Labor of Love

Donating organs has always seemed straightforward: you put the little donor sticker on your driver's license and doctors use whatever salvageable parts they can to help someone else live. Recycle right? 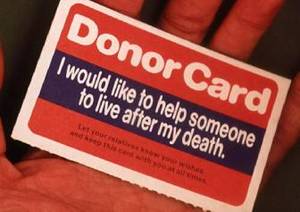 Some cultures have beliefs against donating the body, like Gypsies who claim to need the body to get around during the first year of the afterlife. Organ donation in Japan suffers because followers of Shinto view the body as impure after death. Some faiths have stipulations about organ donation: Jehovah's Witnesses who want to donate organs require that all the blood be drained from the organ during the procurement process.

The Organ Procurement and Transplantation Network, which is responsible for everything from donor awareness to actual transplantation, reports over 105,000 people who are waiting on a transplant. The biggest problem that faces organ donation today is potential donors not making their wishes known. Putting the sticker on your license or signing up once is often not enough to assure donation. A living will and open communication with family and loved ones is the best method.

Living wills serve a lot of different purposes and assist families when making life or death situations while keeping your wishes in mind. Living wills can be important in helping families feel they have made the right decision during a traumatic time as well as protect your request to donate your organs. Like a normal will, living wills should be notarized in the company of multiple witnesses. Laws vary from state to state but your living will should be distributed to your physician, family members, the medical records department at your local hospital, and/or to a close friend to ensure your wishes are respected.

If you are open to organ donation and interested in learning more about the different types of wills, check out the LegalMatch Law Library — it could save a life. 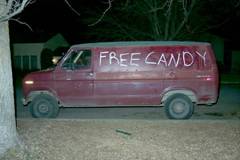 It's been 3 years since LegalMatch's Corporate Counsel Ken LaMance broke the Valentine's Day Effect. Basically, the Valentine's Day Effect dictates that there will be a noticeable spike in divorce and separation filings during the month of February. LaMance goes on to say that it's not all disenchanted love hangovers from Valentine's Day—some could be attributed to the end of the holidays—but the trend persists. One very unfortunate byproduct of messy divorces or irrational spouses is parental child abduction.

Parents or family members are responsible for about 78% of the child abductions in the United States. Whether the parent is feeling trapped, fears for their safety, or has decided to skip town, child abduction warrants serious consequences. Parents who abduct and take their children out of the state will likely face Federal charges.

Child custody agreements are generally recognized between states because of the full faith and credit clause of the U.S. Constitution. The Uniform Child Custody Jurisdiction Act makes state issued custody agreements enforceable by the 38 states that have signed it, including California, New York, Texas, Illinois, and Florida.  The act also makes it a felony in those 38 states to abduct your child if there is an agreement in place because it is considered derivative to kidnapping. 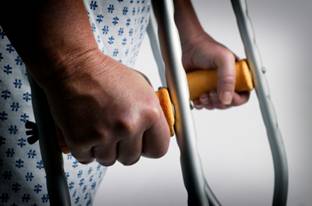 Personal Injury lawsuits begin when an injured party files a complaint with the appropriate local court. A complaint is a technical legal document that's primary purpose is providing relevant facts and the specific laws allegedly violated by the defendant. The complaint also explains what the plaintiff wishes the court to do, such as award damages or issue an order requiring the defendant to do something. Usually the complaint should be drafted by a lawyer. The selection of your legal representation can make the all the difference in a case, especially personal injury.

The first thing you should do when considering hiring a lawyer for your personal injury case is refrain from thumbing through the phonebook. When selecting a lawyer, you want to make sure they are experienced with your case type and remain in good standing with the state bar association. A number of lawyers will offer "free" services or consultations but often times recoup these costs with pricey hourly rates or other fees. 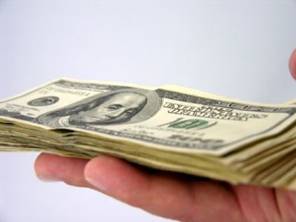 You shouldn't hire anyone who solicits your business by calling you or saying they are already involved in someway because it is referred to as "ambulance chasing" and is against the Legal Rules of Professional Conduct. Most times, it's best to consider multiple lawyers so that you can figure out which has the skills, will be most honest, and is committed to working diligently on your behalf.

Everyone's least favorite part about hiring a lawyer is the costs associated with handling a case. Have your lawyer write-up their expenses so that you understand for what you are paying; some common costs incurred by clients include court fees, copies of reports or transcripts, postage, telephone calls, courier services, photocopying, legal research, as well as any costs associating with travel for the case.

The best way to avoid hiring a bad lawyer is through research. For more information on hiring, finding, or working with a lawyer, please check out the LegalMatch website or our Personal Injury Forum.

Worst Ways to Quit Your Job 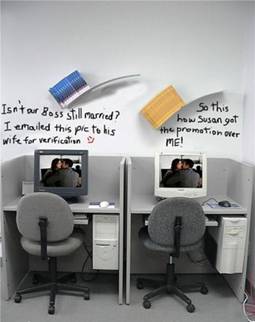 Employment agreements are largely considered "at-will." At-will employment allows for an employee to be terminated for any reason, or no reason at all. Because of this, many disgruntled ex-employees who seek wrongful termination cases are thwarted.

But at-will employment also allows an employee to leave their job at any time.  Most people respectively give their employers notice of their impending departure… but life would be so boring if nobody ever lost it and threw dramatic emotional tantrums of resignation.

The Office Space: Just stop showing up because "you didn't really feel like going anymore."

The Last Word: This method will force you to put a lot of thought into a scathing letter of resignation, but provides a great outlet for people who can't think on their feet. Try to keep the true angry letter writer code and make some passive aggressive comments with thinly veiled sarcasm.

The Entrepreneur: Open an E-Bay store and start auctioning off anything around the office that you can get your hands on. Start by taking pictures of other people's work-stations and tell them you're doing inventory (with a wink).

The Gossip Queen: Take a "personal call" near a group of cubicles or employees having lunch and go into gruesome detail about how you will be getting fired after the "crazy night" you and your boss had. Be sure to include sex, crimes, and something off the wall like Easy Cheese or an endangered species.

The Johnny Paycheck: You remember that catchy song "Take This Job and Shove It?" It's time to make your own rendition, but don't bring more than a boom box — instruments and amps are awkward to clean up afterwards.