The world of frivolous lawsuits is a sad yet paradoxically hilarious one. On one hand these damaging lawsuits really harm the people who are forced to defend against them. They seem to speak heavily to the bottom feeding nature of the plaintiff. But the motions that are filed can become so outlandish that it makes you wonder what dime-store attorney agreed to take the case.

William Deparvine may have gotten the death sentence for killing Richard and Karla Van Dusen, but that didn't stop him from suing the surviving family for their classic Chevrolet pickup truck. Deparvine, according to the criminal trial, murdered the Van Dusens and forged a $6,500 bill of sale for their classic truck in hopes that someone else would end up getting blamed for killing the couple. After receiving his death sentence, Deparvine sent his lawyer to the local court to sue the family for the truck he had tried to steal from them. The first case was decided against him but he still has one appeal left. 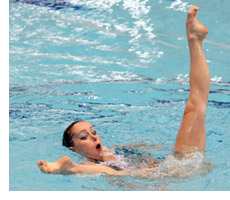 A Polish woman filed a lawsuit against a hotel in Egypt for impregnating her daughter. Magdalena Kwiatkowska, the mother, alleges that stray sperm in a swimming pool impregnated her 13-year-old daughter while vacationing there. The report didn't state if the case was a child support case against the pool or personal injury matter. Magdalena told London Times reporters that her daughter hadn't met any boys on the trip either, so there!

Nobody likes overdraft fees or bank lines; but don't worry, Dalton Chiscolm is here to save all of us like a lawsuit wielding Jesus of Nazareth. Chiscolm of New York was so underwhelmed with Bank of America's customer service that he filed a lawsuit against them for a tidy sum of "1,784 billion, trillion." When the New York State Judge that sentenced Madoff to 150 years in prison saw the case she laughed. If he doesn't want the case thrown out, then Chiscolm will have to explain how he came up with $17,840,000,000,000,000,000,000 in assorted damages and whatnots. Even Austin Powers villain Dr. Evil didn't want that much when he held the world ransom. 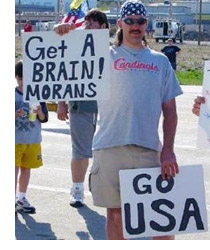 We all mistype words, sure. It's probably why cell phones today finish your words for you with T9 or give you a squiggly red line under a misspelling. It could be that our programs have gotten sophisticated enough that we can mentally check out - but what does it say about our society?

It's widely accepted now that the internet isn't going anywhere, so companies are spending billions of dollars on advertising. At the forefront of internet marketing are misspellings. Companies are purchasing commonly misspelled words and homophones to generate more traffic through their websites. While this may seem pretty disappointing, it is making some people a lot of money. Spyfu.com recently issued a list of the highest pay per click terms and number one was "online life assurance quotes."

My two favorite instances of misspellings are:
Protestors: If you're holding an angry sign that's misspelled than people just laugh at you. Er, I mean they're honking and laughing in support. Go USA!

Tattoo Artists: People try to sue these guys all the time over misspelled tattoos. You would think each shop would have a Webster's Unabridged, although it still may not clear up the "your" and "you're" problem, or the "to" and "too."

Top 5 Patents for an Off the Wall Valentines Day

GPS Lingerie: Has your Valentine cheated on you before? Can't get your hands on an actual ball and chain? Is your tranquilizer dart gun in the shop? Well then GPS outfitted lingerie is the perfect gift this Valentines Day because nothing says love like distrust. 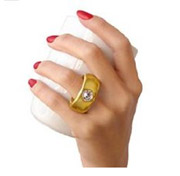 Ring Cup: It's likely that nothing will get your girlfriend more excited than the 'ole proposal. So why not alienate her by crushing any notion of a future together after giving her a 2-Carat Ring Cup Gold. It even comes packaged like a real ring.

Elephant Poop Roses: If you've gotten your significant other bouquets the past few years and want to switch it up, this is the solution for you. Make sure you tell them that they're made from dried elephant poop while their face is still buried in them. Hmmm, makes you want to "stop and smell the (elephant poop) roses".

Matching T-Shirts that Measure Your Proximity to Your Lover: I know my grandmother would appreciate the matching quality. I'd also put money on the shirt working like a charm if you could find someone else sporting it. It is unlikely though, but certainly a possible way to test the potential strength of two opposing magnetic personalites.

Most laws are written with the reasonable and prudent person in mind; however, I think it's about time we accept that people just aren't realistic when it comes to giving children gifts. Each year hundreds of products are recalled for various reasons, but most due to injuries or lawsuits derived from small or dangerous parts.

Below is a selection of our absolute favorite toy industry inventions that promised "loads of fun," but tried to murder you sadistically instead. We aren't even going to consider lame dive stick impalements or choking hazards. This list is the who's who of the toy assassin world. 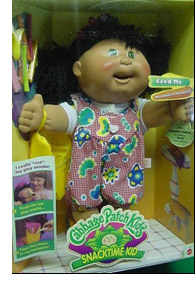 Sky Dancer
Galoob Toys decided to embark on its genocide of little girls when they marketed the Sky Dancer. Each time a child set one of these little minxes off, two things were sure to happen: her arms would spin with the velocity that made the foam like a razorblade; and her unpredictable flight pattern could mean a Bullet style chase scene through your home. Sky Dancers were responsible for scratched corneas, temporary blindness, mild concussions, broken ribs and teeth, as well as cuts to soft flesh that called for stitches.

Sock'Em Boppers
Sock'Em Boppers promised overt violence and "more fun than a pillow fight;" but (from experience) instead normally ended up fostering an animalistic fighting rage in children. Those inflated brass knuckles could really snap your head back, too. I wonder if there has been assault charges filed resulting from any Sock'Em Boppers matches.