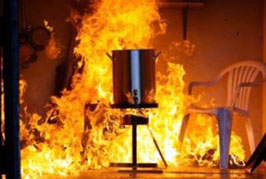 The U.S. Congress passed an important joint resolution on October 6, 1941 declaring that the last Thursday in November would be Thanksgiving Day.  I always know it’s time to eat some turkey when the Macy’s Thanksgiving Day Parade airs. And yes, I’m hoping for a little excitement like the Rudolph Hindenburg or the 2003 Sonic parade balloon massacre.

At any rate, we want to help you avoid a meltdown this Thanksgiving. Below are the most common causes for a Thanksgiving Day disaster:

Deep Fried Turkey—Despite this William Shatner PSA  and countless interviews with firemen, deep-frying your turkey is probably the most dangerous, albeit delicious, method of cooking a holiday feast. If you burn your neighbors house down you’re probably going to have to pay for it. So, do us all a favor and at least use these safe frying guidelines.

Food Poisoning—While it’s considerably less likely that you’ll be sued by one of your guests for getting them sick, a bout of food poisoning entails some of the nastiest symptoms. Use your meat thermometer and always steer clear of anything that still looks “pinkish.”

Slip and Fall—With all of that tryptophan and alcohol coursing through your veins, you and your guests may not be the picture of grace or coordination. Make sure your home is well lit and go ahead and pay to get that rickety stair replaced. You don’t want to have to pay for medical bills or missed work from a slip and fall accident. 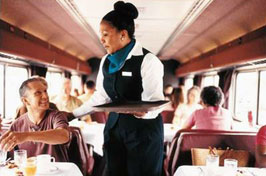 Thanksgiving week is the busiest travel time during the holiday season. Don’t believe it? Well, this year expect even less planes and more people.  To start off, make sure you charge your devices accordingly. And for you folks who prefer to drive? Traffic as normal.

For further help, be sure to check out our travel tips for traveling during the 2012 Holiday Season below:

Check your custody agreement before taking your child out of the state or country. TSA agents are always suspicious of a parent traveling alone with their children and will often ask for a consenting letter from the other parent.

Buy travel insurance. There’s nothing like shelling out a bunch of dough to have your luggage lost or be seriously damaged. Travel insurance normally covers all of that but we recommend you also go for the trip interruption or cancellation insurance for those expensive trips abroad. Things tend to pop up or go awry during the Holidays.

Consult with an immigration lawyer before visiting home. Due to the increasing border tensions, immigrants to the United States who do not have full citizenship will want to consult a lawyer on whether it’s a good idea to travel back to their home country. You don’t want to be denied re-entry and be stuck!

Get someone else to take care of the transportation. The best way to avoid personal injury auto accidents, DUI/DWI charges, and all of those other legal headaches is by getting someone else to handle it. Take a taxi, bus, train, airplane, subway, rickshaw, whatever it takes trying not to drive. It could even be a fun game to play. 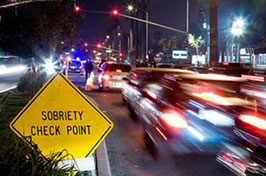 The Holiday Season means you’ll probably be going to parties.  Christmas parties for work and friends, New Year’s celebrations, and all of those other odd ball get-togethers just because it’s “that time of year.” Whatever the scenario, this usually means drinking a lot of eggnogs and Red Hot Santa Tini's!

Hopefully you’ve got some age-appropriate children or friends who can chauffer you around. However, if you’re not that lucky, you will really want to watch your drinks per hour.  Police will be out in force again this year looking for those tell-tale signs of drunk driving.  In 2010 alone, MADD reported over 1.41 million drivers were arrested for driving under the influence of alcohol or narcotics. So the odds aren’t with you Tipsy-Tina.

Additionally, state and city police with be setting up their seasonal DUI/DWI checkpoints (gasp!).  While there’s an internet full of applications allowing users to post and map sobriety checkpoints, the police are aware of these and relocate accordingly. Don’t be surprised if you still end up being stopped unexpectedly.

Below are 7 factors that can be used to determine if your DUI/DWI arrest at a sobriety checkpoint was done legally:

Obviously, DWI and DUI crimes carry heavy penalties such as fines, jail time, and even loss of driving privileges among other harsh consequences. If arrested you’ll want to get working with a criminal lawyer immediately.

Deck the Halls with Wills and Trusts! 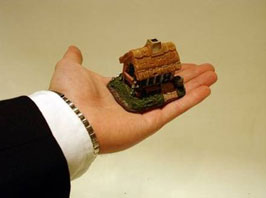 One of the best parts about the holidays is that people finally stop to enjoy life. However, that also reminds us that life is still, according to popular science, temporary. Sorry, even in one of those cryogenic freezers—there’s still no guarantee you’re coming back.

Now that you’ve come to terms with the mysteries of life, you’ll probably want to be remembered fondly, or at least dole out all of your coolest stuff to your favorite people. Right? That’s where a will or trust comes in.

To be valid, a will normally must be written and signed with a witness (sometimes two) who can testify if needed. The requirements for a will vary by state but normally include:

A trust is a legal property interest held by one person (trustee) for the benefit of another (beneficiary). There are 4 main types of trusts:

If you decide to draft a will or trust, consult a lawyer who is familiar with your local laws or check out the LegalMatch Law Library for hundreds of helpful articles of wills, trusts, and estates.